Home > About Us > Meet the team > The Radiologists > Malcolm J Hudson 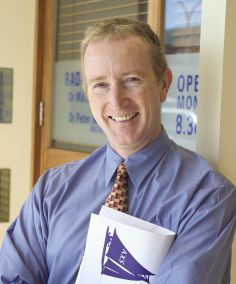 Born in Mt Eden Auckland, Malcolm was also educated locally, attending Auckland University, Auckland Medical School, and post-graduate studies through the Auckland public health system. Shorter periods of training were spent at Guy's and St Thomas' Hospital London (rheumatology) and at Johns Hopkins Hospital Baltimore (nuclear medicine).
He has enjoyed nearly 30 years of marriage to Paula, with sons born in 1987 and 1990.
His radiology career began with the Waitemata DHB in 1994 as one of the team at North Shore Hospital and supervising the department at Waitakere Hospital. Increasingly over the years, he took up sessional work with Mercy Radiology, eventually joining that large private practice fulltime. During that time, he was a key figure in establishing a new Nuclear Medicine facility in 1998 (NZ Medical Imaging) which introduced modern nuclear cardiology to Auckland. After 7 years Malcolm looked for further challenges and left NZ to join a solo practice in Cairns, Far North Queensland and this was a very successful venture for all involved. The ANZAC connections forged in the tropics led to the establishment of AXS in 2003.
He maintains links with several radiology practices in North Queensland in the form of locum visits.
An avid but perennially struggling golfer, Malcolm also enjoys boating and fishing on Lake Rotoiti during family holidays.