Home > FAQ’s > Nuchal scan
At about 3 months (12 - 14 weeks) into your pregnancy, your maternity carer may recommend you have a nuchal (pronounced newkul) scan. The term nuchal refers to the neck, and so this scan looks particularly at the baby's neck region to measure a thin fluid space (which rather resembles a blister) that all babies at this stage of development have. Fluid within or around the fetus looks black on ultrasound, because the sound waves pass straight through it without an echo.  So this fluid creates a translucency, hence nuchal translucency, or NT.

It has been found that babies with a lot of fluid over the back of their neck i.e. a thick NT, have more than their share of problems including birth defects, particularly from having Down syndrome. The later in life the mother is when she becomes pregnant, the greater chance of a baby with Down syndrome (also called trisomy 21) . With the NT scan, however, we look at that particular baby and determine what its individual risk is. The NT result (usually between 1.0mm and 3.0mm) is combined with results of special maternal blood tests, taken at around the same time, to produce a multiplication factor which is applied to the background risk of Downs which is based on maternal age. This gives a modified risk which is often much lower than the background risk, but occasionally will show up a baby at increased risk an abnormality. To actually diagnose e.g. Down syndrome, before birth requires tests which themselves carry some danger to the baby, so we use the NT scan and the modified risk to select those pregnancies which need a closer look, and lets all the others proceed safely in the anticipation that all's well.

Performing an accurate NT scan is technically challenging, requiring special skills, equipment and training. To be part of the screening programme, the providers need to be accredited. At AXS, all of the radiologists and sonographers have completed an approved training scheme e.g. the Fetal Medicine Foundation in London UK.   Annual auditing of our results ensures you can be confident in the accuracy of your scan results.

For more information on the NT scan and screening tests in pregnancy generally, visit this UK site or this NZ site. 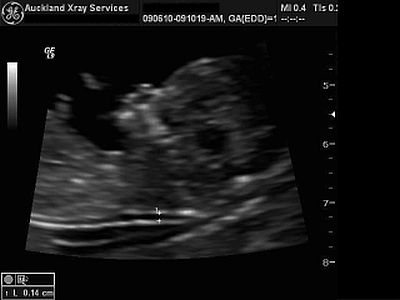